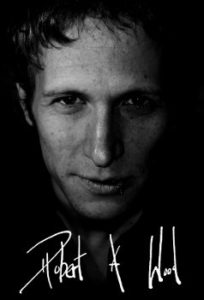 Robert A Wood (1978-) was born in High Wycombe, England. However, he moved to Penderyn, Wales when he was very young and his first memories are of his neighbour, Sarge, a piebald horse. He moved back to England when he was six, and the valleys were replaced by the sea off the coast of the town where he was to grow up, Eastbourne. His youth was misspent sailing, windsurfing, playing guitar and coding.

He currently lives in Birmingham, England where, when he isn’t writing, he runs his murder mystery company, The Mowbray Murders. He is a big believer in Open Source software, and it is used exclusively in the creation of his books. For word processing and page layout, LibreOffice is used, whilst The Gimp is used for cover design. This software is run on GNU/Linux (most recently Ubuntu).